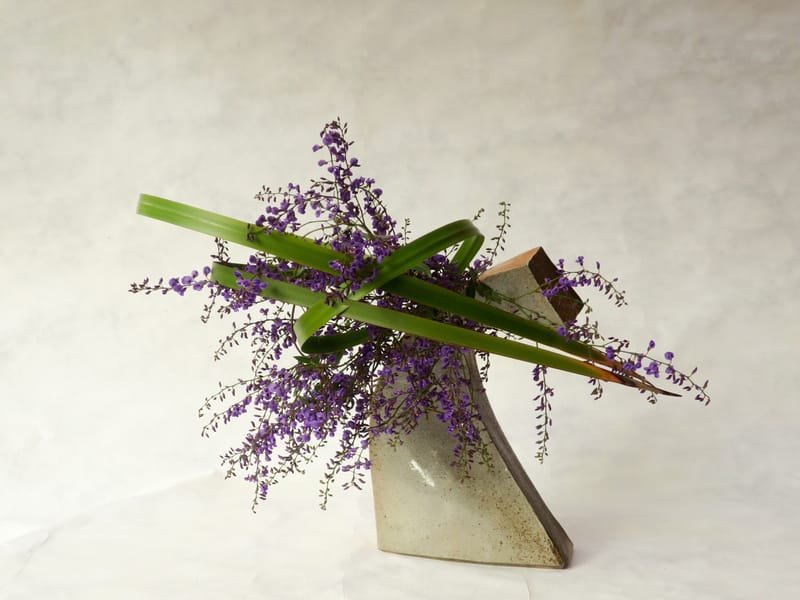 I am an ikebana teacher and practitioner of the Sogetsu School and hold the Riji teaching certificate. Since my early childhood I have lived on the Surf Coast of Victoria Australia. The seaside and nearby hinterland forest environment were my chidhood playgrounds and taught me a love and deep regard for the natural environment.

My journey into ikebana began in 1992 when I spent four months in Nagoya, Japan, where I took my first formal lessons. After returning to Australia I began to study Sogetsu Ikebana and have done so continuously since 2001. I became an accredited teacher with the Sogetsu School in 2005 and have taught since that time in Geelong, and now Melbourne. I hold the Riji certificate, highest qualification available to teachers living outside Japan, and since 2017 have been the Director of the Victorian Branch of the Sogetsu School.

In 2011 I spent three months attending classes at the Sogetsu Headquarters in Tokyo, having been awarded a scholarship by the Norman and Mary Sparnon Endowment Foundation. That time was the most extraordinary privilege which enormously enriched my understanding of the art ikebana in particular and Japanese culture in general.

I have participated in conferences, exhibitions in Japan and Australia including the Melbourne International Flower and Garden Show and the creation of ‘Five Elements Water’ at the National Gallery of Victoria under the direction of Tetsunori Kawana in 2009. I have given workshops in Melbourne, Sydney, Brisbane, Adelaide, Perth, New Zealand and Ottawa, Canada.

My working life has always been in direct patient care roles in health services. Prior to retirement I was psychologist in private practice and before that worked in the community health sector as well as in acute hospitals. I have a Bachelor of Arts (psychology) from Deakin University, a Bachelor of Education (Counselling) from LaTrobe University and am a triple certificated nurse.